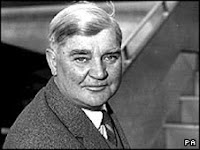 The architect of the NHS was Aneurin Bevan (known as Nye). He was born in November 1897 and began his working life as a Miner. He was a gifted orator and passionate for the interests of the working class which he came from. Michael Foot wrote a superb two volume biography, which greatly influenced me. [For my A-Level History Project I undertook research into the life of Nye Bevan].

He was elected to the House of Commons in 1929 and became one of the leading figures in the Labour Party. His crowning achievement was the creation of the NHS - which was bitterly resisted by the Tories and many Doctors. "At all its procedural stages in the House of Commons the NHS bill was opposed by Conservatives. Even before the third, final, reading of the bill, often a formality, Churchill mobilized his troops into opposition. Whatever words may be used to describe creation of the NHS, 'consensus' should not be among them. Bevan encountered 'dogged obstruction' and 'virilent opposition' from Conservative Members of Parliament' [Creating the National Health Service - Marvin Rintala (2003, Routledge).
The BBC website quotes a doctor "Doctors were a pretty conservative bunch, certainly the older ones, and many hated the NHS. "They saw it as the government interfering in the doctor and patient relationship, although some just opposed it outright on political grounds."
An appreciation of Bevan's life can be found at http://www.sochealth.co.uk/history/bevan.htm
Posted by J David Morgan at 05:04