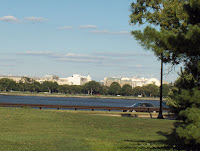 One of the nicknames given to yesterday's three primaries was "the Potomac Primary", in recognition of the central importance of the river as the border between Maryland, Virginia and the District of Columbia. (This wasn't always the case - when the two aforementioned states ceded land to the District it covered both banks of the river. Land on the eastern bank was returned to Virginia in 1847).
Some have thought that the name might have its root in the greek word for river (potamus) - but it is more likely that it is a Europeanised version of the name of a tribe who lived in the Northern Neck area (to the South of Washington DC - near to Fredericksburg). This tribe was part of the Powhatan Confederacy (also known as the Virginia Algonquians). Other scholars have argued that the term means say the name means "place where people trade" or "the place to which tribute is brought".
The river runs for approximately 383 miles - from the Fairfax Stone in West Virginia to Point Lookout, Maryland.
Posted by J David Morgan at 08:02