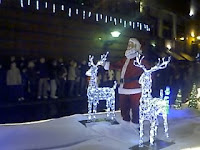 Yesterday I spent the day in Birmingham, Britain's second city. I grew up just outside Birmingham (born Coventry, lived in Walsall from the age of 7 until I went to Sheffield University and my parents still live there). The city itself has a population of just over one million persons and is at the heart of the West Midlands conurbation which has over two million. Birmingham rose to importance during the industrial revolution. President Clinton visited in 1998 when the G8 summit was held there.
The city has been transformed in recent years. The new vibrancy was evident yesterday. The centre was packed with Christmas shoppers, and a huge Christmas market spread across the central area. http://www.birmingham.gov.uk/frankfurtmarket.bcc. In the early evening we made our way through the International Convention Centre (where the symphony hall is http://www.thsh.co.uk/page/symphony-hall-birmingham/) to the canals. These were once in a very run down area but now are the jewel in Birmingham's crown. We saw the Canal Boat Light Parade - a fantastic Christmas occasion.
Birmingham has its own council http://www.birmingham.gov.uk/.
Posted by J David Morgan at 05:30